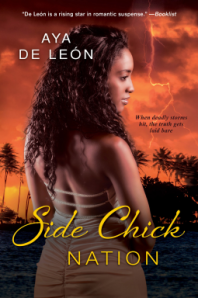 Side Chick Nation by Aya de León is book four in her Justice Hustlers urban crime fiction series. I haven’t read the previous books in the series, but this one works well as a standalone.

Side Chick Nation is an unexpectedly interesting read. The author explores how climate change, colonization and a lack of appropriate response on the part of the US government played a major role in the delayed recovery in Puerto Rico in the aftermath of Hurricane Maria. Interestingly enough this concept was woven into the fabric of a urban crime fiction drama. de León brilliantly compares the “side chick” phenomenon, generally defined as a relationship between a man and a woman in addition to his relationship with his wife and/or girlfriend. The “side chick” knows that she is not a priority. Many from Puerto Rico now see their homeland as the US’s side chick. They pay the same taxes but don’t reap the same benefits or rewards.

Dolores “Dulce” Garcia, the side chick in this novel, finds herself trapped in Puerto Rico after Hurricane Maria. Dulce is of Cuban and Dominican descent but fled to Puerto Rico to escape her abusive boyfriend. Dulce has been a sex worker since the age of fourteen. She knows the score and frequently places herself in the role of sugar baby or side chick. Following the hurricane, she is confronted with the Puerto Rican situation and joins journalists who are striving to get the story out to the masses. Dulce is forced to decide if she’s worthy of girlfriend or wife status. This is her story and the story of an island of people trying to rise above “side chick” status.

Side Chick Nation is entertaining and informative. I found it a little slow in the beginning and the multiple storylines were initially a bit confusing, but the pace picked up and the storylines resolved. I rate Side Chick Nation a solid 4 out of 5 stars and recommend it to anyone who enjoys intelligent urban fiction.

My thanks to Kensington Books and NetGalley for the opportunity to read an advance copy of this book. However, the opinions expressed in this review are 100% mine and mine alone.

One thought on “Side Chick Nation by Aya de León”